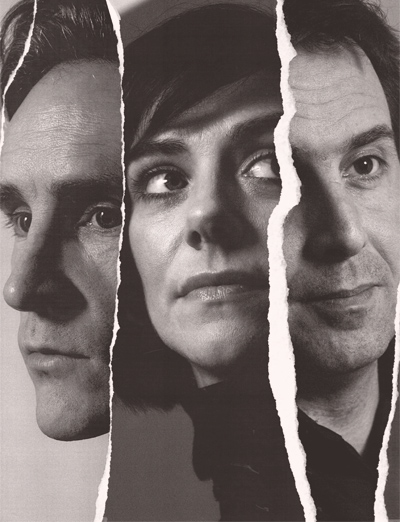 Deception is a two-way street.In this Olivier award-winning play the complex web of lies and deceit that are spun over a 7 year extra-marital affair not only expose the damage inflicted by desire, but the devious workings of the human heart.

Betrayal | King Lear | Krapp’s Last Tape/Footfalls Buy for all 3 shows and get up to 25% off full price tickets! More info

Find out about the two Betrayal workshops on offer for secondary students. More info

Items from the set of Betrayal will go on sale after the production. More will be announced in due course.

“a distinguishing quality of Dominic Hill’s revival of this back-to-front love story is his mastery of every beat of the script and, yes, every Pinter pause. What he brings, in his inaugural production as artistic director at the Citz, is such steely precision that each moment really counts.”
The Guardian ★★★★

“an unflinching vision of the emotional inarticulacy of the British upper-middle class…All three are terrific…this Betrayal is tough, intense and rings true.”
The Guardian ★★★★

“classy and resonant…it may only have three characters (plus Barrie Hunter’s humorous Italian waiter), but my goodness does it have the power to fill a large auditorium.”
The Telegraph ★★★★★

“The raw energy, captivating, sparse poetry and clever comedy of this semi-autobiographical piece are undeniable. I have never seen them given such a consistent and atmospheric expression as Hill gives them here.”
The Telegraph ★★★★★

”It is, in both aesthetic and technical terms, truly exquisite.”
The Telegraph ★★★★★

”It is from the first moment to the last, a beautiful, taut and enthralling Pinter, and as close to a perfect start to Hill’s leadership as one could wish for.”
The Telegraph ★★★★★

“Distressing, caustic and superbly realised, this Betrayal is a menacing celebration of The Citizen’s new direction.”
The Stage

“TENSE, thought-provoking and beautiful, Dominic Hill’s production of this Pinter classic offers a profound sense of a world in which all the old bedrocks of social custom and certainty are shifting.”
The Scotsman ★★★★

“Dominic Hill’s production is more elegant than showy, and makes no claim to offer huge insights into the story’s 1970s setting, or its exquisitely-crafted structure. Its focus is on the language, on the economy of the everyday conversations through which this classic story emerges, and the brief, lethal pauses that punctuate them.”
The Scotsman ★★★★

“three perfect, beautifully-pitched performances from Neve McIntosh as Emma, Cal MacAninch as Robert, and Hywel Simons as Jerry.”
The Scotsman ★★★★

“as immaculate as it is thought-provoking, and often downright beautiful. ”
The Scotsman ★★★★

“the real pleasure, in a production which oozes class all the way from the measured but inexorable revolution of the set between scenes to the men’s brown suede brothel creepers, is how well the actors understand the weight of Pinter’s dialogue.”
The Times ★★★★