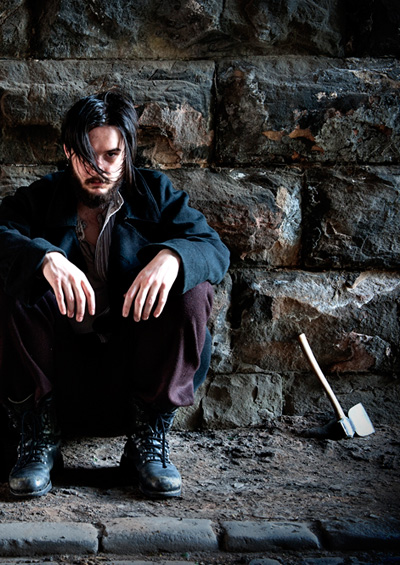 Raskolnikov is surrounded by the harsh injustices of the world; the grime of poverty and prostitution, unscrupulous pawnbrokers chasing debts; and a sister about to marry someone she doesn’t love to keep her family alive. His guilt is unbearable. Only Sonya, a downtrodden prostitute, can offer any chance of redemption.As Raskolnikov enters a dangerous cat and mouse game with the magistrate, a psychological thriller unfolds.Chris Hannan’s gripping new stage adaption of the iconic novel will deliver Dostoyevsky’s masterpiece with a raw energy and bold conviction that shines new light on its relevance to today’s world of corruption and crime, realised by the award-winning creative team behind The Three Musketeers and the Princess of Spain, re-united for this co-production with the Liverpool Everyman and Playhouse and the Royal Lyceum, Edinburgh.

“a brilliantly accomplished staging”
The Telegraph ★★★★

“Adam Best is excellent as the alienated student Raskolnikov”
The Times ★★★★

“a fearlessly rich production”
The Herald ★★★★

“under Hill, the taut script becomes an exciting commentary”
The Stage

“another milestone in the illustrious history of the Citizens”
Sunday Herald

“An accomplished and haunting production”
The Public Reviews ★★★★

“Another hit for the Citz.”
Glasgow Theatre Blog

“catches the disturbance and complexity of Dostoyevsky’s novel”
Reviews Gate

“It’s a crime thriller and a whodunnit meets Karl Marx and Jesus Christ.”
Writer Chris Hannan in The Herald on adapting Crime and Punishment for the stage

“I had my first Raskolnikov dream the other night.”
Adam Best on playing the murderous lead in Crime and Punishment in the Sunday Herald The Sunday Herald

“You’ve got no idea what Porfiry’s going to do next…He’s got no rules. His methods are wild”
George Costigan in The Liverpool Post on playing the detective in Crime and Punishment

“Reading the novel, you… go on a huge emotional and spiritual journey with him [Raskolnikov]. That’s the journey Dominic and I want to give theatre audiences.”
Chris Hannan quoted in The Scotsman

£12 - £19.50 (concessions available) Previews £8 | Tuesday £12 £2 online transaction fee applies See Pricing for all prices, concessions and offers inc. 50p Tickets and Season Pass
+ £6 entry to Notes from the Underground with your ticket to Crime and Punishment

Next entry: Notes From The Underground

Previous entry: On the Page