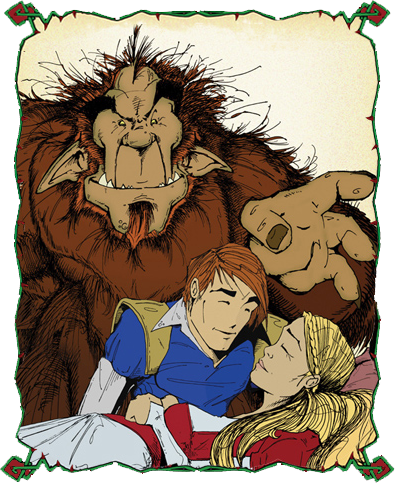 Pricked by a spindle on her 16th birthday, Sleeping Beauty falls into a deep, deep sleep under the watchful eye of the mischievous, flatulent Fairy Goody – whose spell backfired and left her with wonky wings. Obliged to play matchmaker for the slumbering princess, Goody puts prospective princes through their paces in search of the one who will awaken her mistress with a kiss.But the prospect of happy-ever-after is not so straightforward in this gleefully gruesome take on the traditional tale. Perilous secrets will be revealed and ogres lurk within the kingdom, as Beauty uses all her wits to get her family home safe.FAMILY WORKSHOP On Sat 15 and Sun 16 December, we are hosting fun workshops for 5-10 year olds and their adult companions. More infoSCHOOLS' BOOKING FORM Click here to request tickets online or download a form (schools only).Gorbals schools performances supported by Arnold Clark.CHARITY PREVIEW All proceeds go to the Prince and Princess of Wales Hospice.

“Dominic Hill has got just the right level of scary in this dark and lush production of Rufus Norris’ take on the Sleeping Beauty story.”
The Stage

“a fairytale so skewed, so weird, and so stylishly out of kilter that it seems designed for teenagers who would snarl at the very idea of traditional pant…rip-roaring dramatic conflicts…remarkable music…memorable fantasy-tat design.”
The Scotsman ★★★★

PLEASE SUBMIT YOUR COMMENT/RATING USING THE FORM AND WE WILL MANUALLY PUBLISH COMMENTS BELOW (due to technical issue they’re not loading automatically on this page). RATINGS FUNCTION NORMALLY (see above for average rating).

“Another great kids show from the Citz. The actor ‘in the table’ deserves a medal. The Princes, who we only realised afterwards were all played by one person, was also a favourite. So good to see something a bit different. Keep it up.” Web comment

“Having attended and enjoyed the Citizens Panto in recent years, we found this years production to be a very disappointing Sleeping Beauty. The stage setting and lighting only added to what was a dark and dismal night at the Theatre.” Web comment

“I have to totally disagree with the recent comments. We go to the Citz because we know we WON’T see a Panto. Anyone expecting that should go to other theatres in the city. Admittedly this Sleeping Beauty was scary, but apart from the very wee ones (some of whom I’d guess were under the recommended age), I only saw happy faces. Our two loved it. A harmless and frankly quite under-played fart joke is not something to worry about. We loved the performances and style of the show. A very classy alternative to panto.” Web comment

“I feel that ‘Sleeeping Beauty’ had potential, however lacked the sparkle and imagination that was evident in ‘Hansel and Gretel’ and ‘Beauty and the Beast’. I have to say that the first half had promise and the second act just did not work. Normally there is a powerful lead villain and characters you care for. By the time the story resolved itself this year, there was confusion and the whole production lost its appeal. I feel bad saying this but the Citizens will need to capture a fresh spark for next year. I normally love the productions but there was not a Christmas feeling this year and I feel disappointed. The writer has missed the essence of what makes ‘Sleeping Beauty’ a clever story. I am sorry to be negative, but I would not recommend this production.” Web comment

“Did not enjoy this panto at all. There was nothing in it that was lighthearted. Found it very strange and quite scarry. Much prefer other panto’s were audience get involved. The thing that disturbed me most is that my grandchildren liked it.” Web comment

“Usual Boxing Day family Christmas day out at the Citz for Sleeping Beauty. Collectively with a teenager and grandma included we are not of the “it’s behind you” family type and definitely have no desire to see the Krankies but if this is what the Citz company class as a family festive fun adventure quite honestly words fail me!!! We will not be rushing to book next year and would warn every parent with ANY aged children to avoid the Citz panto. No family festive fun or sparkle here and we journeyed home depressed after this dark, murderous, horrific, drab, disjointed storyline. The head on the table in the second act will I’m sure be the climax of many a nightmare for the smaller children in their party clothes attending this “play”. Come on Citz I think you’re blurb was blatant mis-selling - Tim Burton it was not. Had to choose 1 star as 0 was not an option offered.” Web comment

“Took my 6 year old granddaughter yesterday afternoon to see Sleeping Beauty. First half very enjoyable especially Goodie the Fairy and her flatulence problem. What happened in the 2nd half ? Frightening white faced ghouls, children eating Ogresses, did’nt resemble any version of Sleeping Beauty I’ve ever seen!! Definately spoiled what should have been a memorable and enjoyable occasion as my granddaughter was more than a litte frightened by this turn of events. Please remind your scriptwriters that young children attend your pantomimes and that it is supposed to be a joyful and not a frightening experience.” Web comment

“An unorthodox Sleeping Beauty tonight at the @citizenstheatre. Dazzling sets, costumes and a cast who worked their socks off! A good night.”
Twitter comment

“Glasgow tweeps if you get the chance go see Sleeping Beauty at the @citizenstheatre - it was great, very dark & the ogre was scary ”
Twitter comment

“We were at ‘Sleeping Beauty’ last night. What a spectator, we loved the costumes, the set, & ‘Goodie’ rocked. As did the Ogre who had my niece on the edge of her seat. Well done Citz. Another great show.”
Facebook comment

“Well acted and well produced. However, the age recommendation of over 5 was under-estimated. This was not a family fun festive adventure - this was dark, gothic and quite frankly a bit too scary for young children. The first half was vaguely enjoyable with some humour, the farting fairy certainly made the children laugh. Unfortunately the 2nd half lacked all of this and quite frankly was pointless - shackled psychiatric mad slaves, ogres wanting to eat babies and young children’s and murderous grandparents in the forest. I for one will be thinking twice before booking anything by this playwright again. Not quite the family festive day out I had planned.”
Web comment

“#SleepingBeauty at @citizenstheatre was mesmerising. Cannot recommend it highly enough. Go see or I’ll send the ogres after you! #theatre”
Twitter comment

“Thanks for your comment. This year we’re excited to have a Rufus Norris version of a classic story. We love being able to offer something a bit different to the pantos across the city and are delighted you enjoy them.”
Citz response

“My family did at one time go to the usual Pantos every year. Oh, yes we did!For the last three years we have been enjoying the beautifully produced and captivating Christmas shows at the Citz, enjoying the wonderful performances from players and musicians (and the lovely music) as well as Alan McCue’s wonderfully sensitive re-telling of loved stories. I developed the habit of going to the Citz as a young teenager and now our own young teenagers will not miss one of these priceless shows. The sets, costumes and lighting are always stunning and can be enjoyed as much as the acting and music. This is just something we do not want to miss. High Definition Live Theatre. Priceless - for everything else there’s…”
Web comment

See Tweets and more on Storify

We can’t promise Blind Date, but we can promise a brilliant adaptation of Sleeping Beauty by Rufus Norris!

PHOTOS AT THE CITZ
If you’re at the Citz this Christmas (or anytime) feel free to add your photos of the theatre to our Flickr Group.