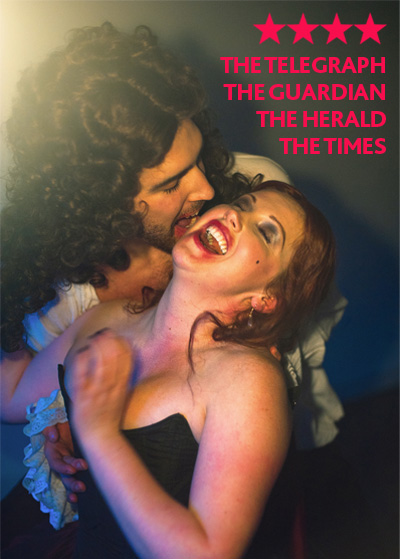 London in the 1670s - Charles II is on the throne, Nell Gwynn is in his bed, and the theatre and sexual promiscuity are flourishing.'The Libertine’ by Stephen Jeffreys is the true story of John Wilmot, the second Earl of Rochester - a hedonistic poet, playwright and rake whose appetite for women and wine has made him a notorious figure. He is a man who does not feel alive unless he exceeds every limit. He’s not easy to like, much less to love. Yet this most charismatic of sinners is forced to reconsider everything he thinks and feels when a chance encounter at the Playhouse sends him reeling.With all the wit, flair and bawdiness of a Restoration Comedy, this brilliant play is both historical romp and incisive critique of an age of excess. Made famous through the film of the same name starring Johnny Depp and John Malkovich, this is the first major stage production in the UK since its London premiere.A corset-ripping 16+ only!The Libertine will tour to Bristol Old Vic for 6 performances from 28 - 31 May. More information

The ‘Definitive Edition’ of The Libertine, written especially for the Citz by Stephen Jeffreys, is available in our online store.
£4.50

“A swaggering, gutsy look at royal decadence”
The Guardian review of The Libertine ★★★★

“Dark yet disarmingly funny”
The Times review of The Libertine (£) ★★★★

“Charms with wit and swagger”
TV Bomb review of The Liberine ★★★★

“Gaudy, bawdy and brilliant”
The Public Reviews verdict of The Libertine ★★★★★

“stridently bawdy, uproariously humorous and philosophical”
The Sunday Herald Review of The Libertine

“Few human beings were as conspicuously alive as Rochester…the Citizens seems like the perfect place to bring him to life once more.”
The Sunday Herald previews The Libertine

“Rochester was like the celebrity of the day”
Writer, Stephen Jeffreys explains the enduring appeal of The Libertine The Herald

BSL interpretor for this video is Katrina Fisher.
More information about the Citz Deaf Theatre Club.

The Libertine - The Merry Gang

A Journey with The Libertine

Read Stephen Jeffreys’ diary of his journey with The Libertine. You can also listen to Stephen talking about how it all started in this audioboo.

The 'Definitive Edition' of The Libertine, written especially for the Citz by Stephen Jeffreys, is available in our online store. £4.50